The name stinger is enough to raise chills for helicopter pilots. A light weight, shoulder fire missile with very high speed and accuracy, it is responsible for 270 confirmed aircraft kills. It can attack aircraft at a range of up to 15,700 feet (4,800 m) and at altitudes between 600 and 12,500 feet (180 and 3,800 m). In Afghanistan, when the Mi26 pilots ruled the sky, it was this missile that brought the Soviets to its knees. First it was attack helicopters, then normal helis and then transport planes. The missile was also responsible to take down a IAF Mi17 during Kargil conflict.

Lets discuss the technology, practical utility and deadliness of this missile. A missile, that many claim as to be decisive weapon in the Afghan war.

Mi-26 ? I don't think those were ever used in Afghanistan .

Stinger's effective altitude 4800m ? Am not so sure . Nonetheless, it's a pickle for low flying craft . Newer missiles like SA-14 and Javelin should be more lethal than this.

I think 4800m is good enough. It creates problem for planes coming low for bombing or planes flying too close to the ground. 240 kills is no small number.

Stinger is basically a anti-helo missile.

I would say its a missile for low flying aircraft. The missile was able to shoot tornado, cargo aircraft in Afghanistan. If an aircraft is approaching low and is not at a high speed, this is the missile to use.

You can use it at fighters coming down to drop iron bomb, close to airports, cargo planes dropping supplies.

90's are over, in todays warfare no modern fighter will fly low.

smpratik wrote:90's are over, in todays warfare no modern fighter will fly low.

You would still have pilots flying low to beat the RADAR. And PAF still has a lot of iron bombs. Not all air forces have sufficient supply of JDAMs

Tactic of flying low to avoid radar is obsolete now, today radars can detect ground weapons hundreds of kms away and most advance radars are able to identify low flying fighters, however you are right fighters like IAF's MiG-27 are vulnerable to Stingers.

Not true. Low flying aircraft are still hard to detect and track - it's geography and geometry. That's why we bother with the expense of AWACS - they eye in the sky can see further .

Yup!
And the advance radars that we have nowadays just better the previous ones. The curvature of the earth and not to mention the raised buildings, all provide for a good cover.

AWACS due to their height have better angle.

Ricci wrote:Mi-26 ? I don't think those were ever used in Afghanistan .

Stinger's effective altitude 4800m ? Am not so sure . Nonetheless, it's a pickle for low flying craft . Newer missiles like SA-14 and Javelin should be more lethal than this. 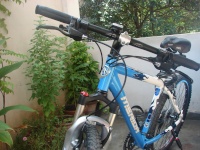 Some snippets from Kargil operation:

The leader of a Mig-21 mission on hearing of the ejection on his radio set decided to carry out an airborne search for the Mig-27. While orbiting his aircraft was engaged and struck by a shoulder-fired missile of the 'Stinger' class or its Chinese equivalent.

On May 28, a Mi-17 mission of four helicopters attacked a target from where our Army units were being engaged. During the attack a large number of SAMs were fired at the mission as reported by the aircrew and confirmed later by the gun cameras. The No 3 in the mission was turning away after the attack when a missile hit its engine and the helicopter went down with the loss of all the four aircrew. It became clear that the Pakistani forces had a much larger number of these shoulder-fired heat seeking missiles than we had estimated.

It had also been thought by many including me that there would be a reduction in the performance of these missiles when fired from the heights of 3 km and above. This turned out to be wrong as the performance envelope of the missile expands because of the increased temperature differential between the missile seeker head and the jet exhaust of aircraft. The numbers of missiles available with the enemy and their improved performance posed greater threat to our aircraft than envisaged earlier and a change in strategy was obviously necessary.

So large numbers of stingers were used against 4 Mi-17 but only one could find it's target. Another thing at kargil heights the seeker performance increases though the aerodynamic manauvering goes down.